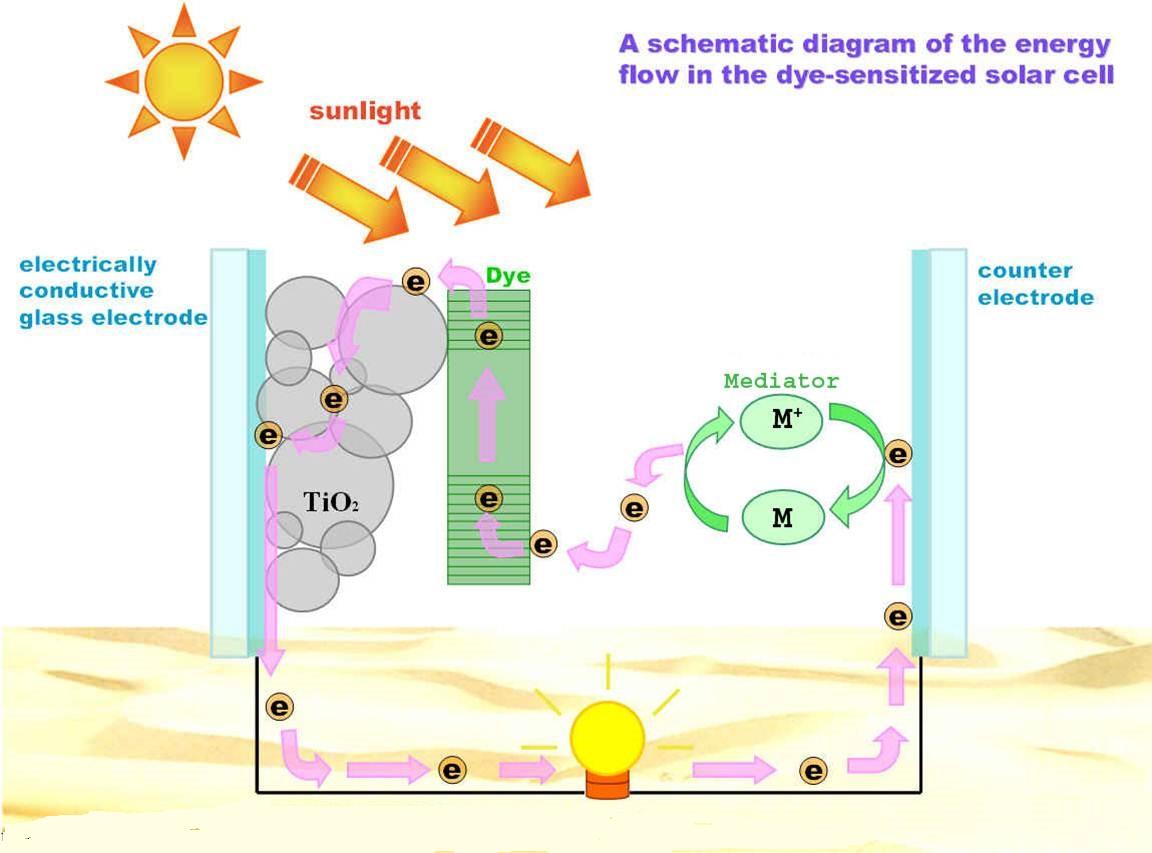 How does DSSC work?
The dyes of DSSC are made of photoactive material. When sunlight falls onto the dye layer, the dye catches the photons of incoming light and absorbs energy, which enables the dye to enter an excited state and emit electrons. These excited electrons are injected into the Titanium Dioxide. The electrons are diffused towards the transparent electrode and they are collected for powering a load. After flowing through the external circuit electrons are re-directed into the cell on a metal electrode on the back of the cell. Then the electrons are returned back to the dye.
Advantages of Dye-sensitized solar cell over a silicon based solar cell
It can work at wider angles which makes the cells absorb more sunlight. It also works in cloudy and low-light conditions while silicon solar cell requires more intense sunlight. These cells do not require frequent replacements because these are long lasting. These are made of eco-friendly nano-materials. They are light in weight and mechanically robust and hence require no special protection from rain or any other harsh object. Besides all of these, the silicon cells are heated easily and hence the efficiency is reduced and it requires protection by covering a glass plate. This situation is eliminated in DSSC. DSSC is made up of thin conducting plastic top layer that helps to radiate heat and is able to operate at low internal temperatures.  It helps in increasing the efficiency of the solar cells.
Disadvantages of Dye-sensitized solar cell
Despite plenty advantages, it has some disadvantages too. The main disadvantage is that the liquid electrolyte is temperature sensitive. At a lower temperature, the electrolytes freeze and at a higher one, liquid electrolyte expands in volume and thus the cell becomes completely unusable. Besides  liquid evaporation causes serious problems. However, replacing the liquid electrolyte with a solid has been a major ongoing field of research. The other problem is that DSCC is not manufactured on commercial scale.
DSSC has an encouraging future in becoming a major contributor to renewable power generation. Simple manufacturing process, cheap materials and a wide range of applications help Dye-sensitized solar cell  to find a foothold in the modern technological market.