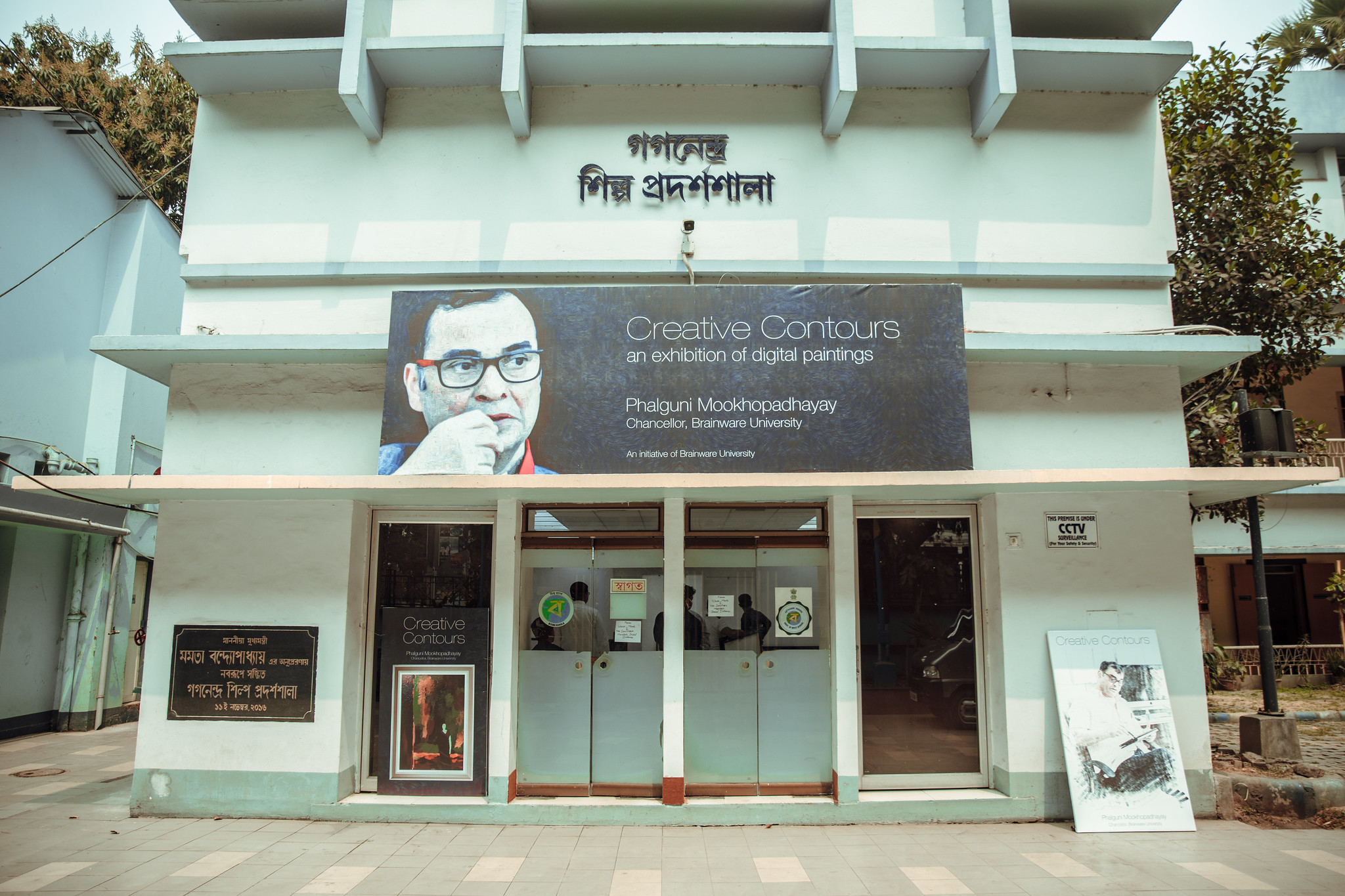 On the Ides of March, he triumphantly concluded his first three-day solo exhibition of digital paintings to an overwhelming response. Flip through the Visitors’ Book at the venue, Gaganendra Shilpa Pradarshashala, and the word “outstanding” leaps out of the pages countless times.

Besides school friends, batchmates, friends and colleagues, visitors who didn’t know him at all dropped by in droves and poured out their appreciation in their comments. “Beyond adjective,” wrote one, while another added: (will add a couple of quotes here from the book comments).

The paintings began with the acquisition of an iPad a few years ago, but it was possibly the lockdown that triggered the idea of an exhibition. Ask him and he says: “My Facebook friends would tell me to do an exhibition but I seriously started thinking about it during the pandemic, because like everyone my age, I could see death staring at me.”

I have known Phalgunida not only because I teach at Brainware University but also because he was my ex-colleague at ABP. When I suggested that he showcase some of his digital paintings and street photography, I was only acting on my training as a journalist, because these showed so much promise. I also suggested that he writes a book on his three-decade journey, when after leaving ABP, he started Brainware in a small room in South Kolkata and worked his way to becoming the chancellor of the university and the founder of one of the top web-servicing companies in India.

When I entered the exhibition venue on March 15, I was pleasantly surprised to hear his songs being played in the background. I was reminded of the intricate planning this exhibition had entailed, because he had insisted that I select 54 from among his 80 paintings (not because the other 26 were bad, but because another exhibition could be slated for later) and edit his captions.

As a result, I was a privileged viewer; I had already had a sneak peek at the exhibits! But that was not a hurdle in being an impartial onlooker; as editors, we have been trained to practise objectivity. Plus, I was seeing them on canvas for the first time.

Amid the afternoon crowd, I walked to each frame, rich in imagery and symbolism. Ask any artist to interpret their work, and they will tell you they don’t have a clue. So I chose not to ask and drew my own conclusions. Some stood out for their design, others for their colour coordination and the most interesting frames had stories to tell.

I watched people taking photos of the paintings, painstakingly writing down the captions, taking selfies with the man of the moment and even queuing up to ask what digital painting was! There was laughter and the bonhomie a good exhibition inevitably fosters.

As I reached the end of the gallery, I asked the artist what his takeaway from this exhibition was. “I was initially a little apprehensive. But from the first day, I started enjoying myself. Lots of friends, colleagues and ex-colleagues dropped in. Everyone was so encouraging. I was really happy,” he said.

Another milestone in an amazing journey. We now look forward to an exhibition of his photographs.